Two times a year, Polytek holds a Mold Making & Casting Seminar & Workshop. Attendees are invited to bring their own models (there is a size limit because the workshop is only two days long).

At one of these workshops, this decorative architectural element was brought in: 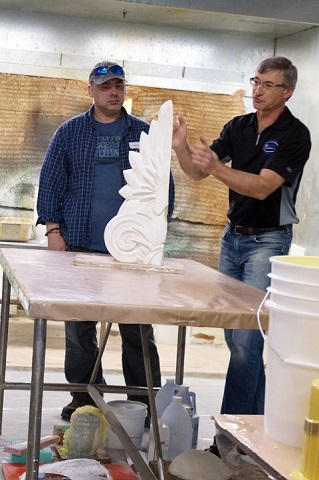 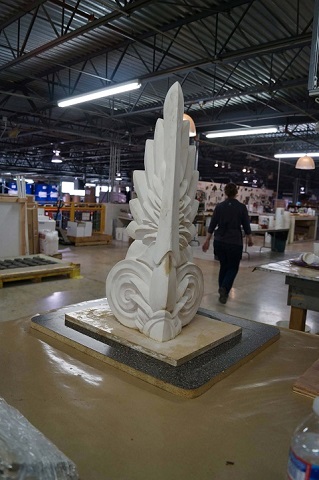 This particular attendee wanted to make a mold of this plaster element to later cast concrete.

After a discussion with Polytek staff members, a strategy was decided for the making of the mold:

The following steps were taken to complete the mold:

Step One: Cover the Model with a Uniform Layer of Clay

Apply a uniform layer of clay (e.g., plasticine clay) to the entire model (often, plastic wrap is placed over the model prior to clay placement). This clay represents the space that the mold rubber will eventually fill – it should be approximately 1/2″ thick and should fill any undercuts on the model so the mold shell does not lock onto the rubber mold. 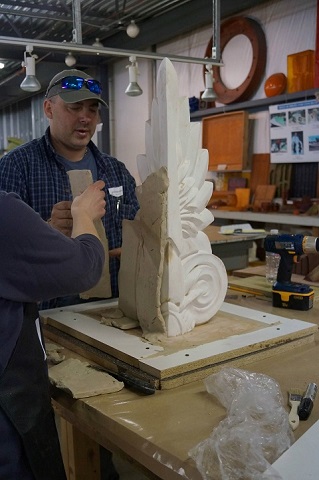 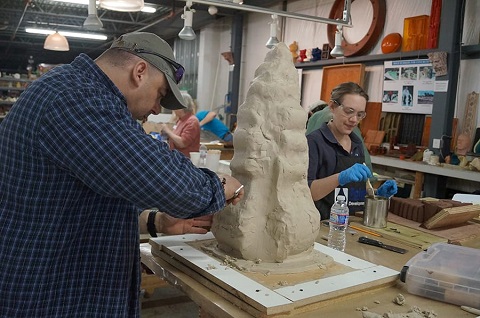 After a uniform layer has been applied, add a clay extension that will later be used as the pour hole for the liquid rubber. Also build-up a thick parting line in the clay that will later serve as the area where the finished rubber mold is cut. When possible, situate this line in an inconspicuous area of the model – along the corner, for instance, so parting lines are less obvious on castings. 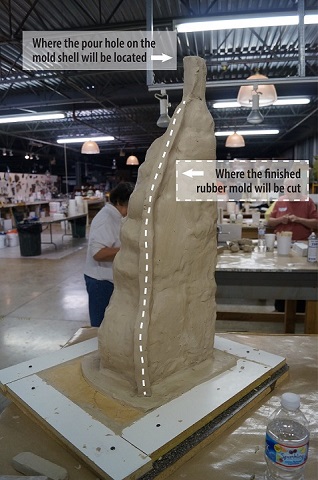 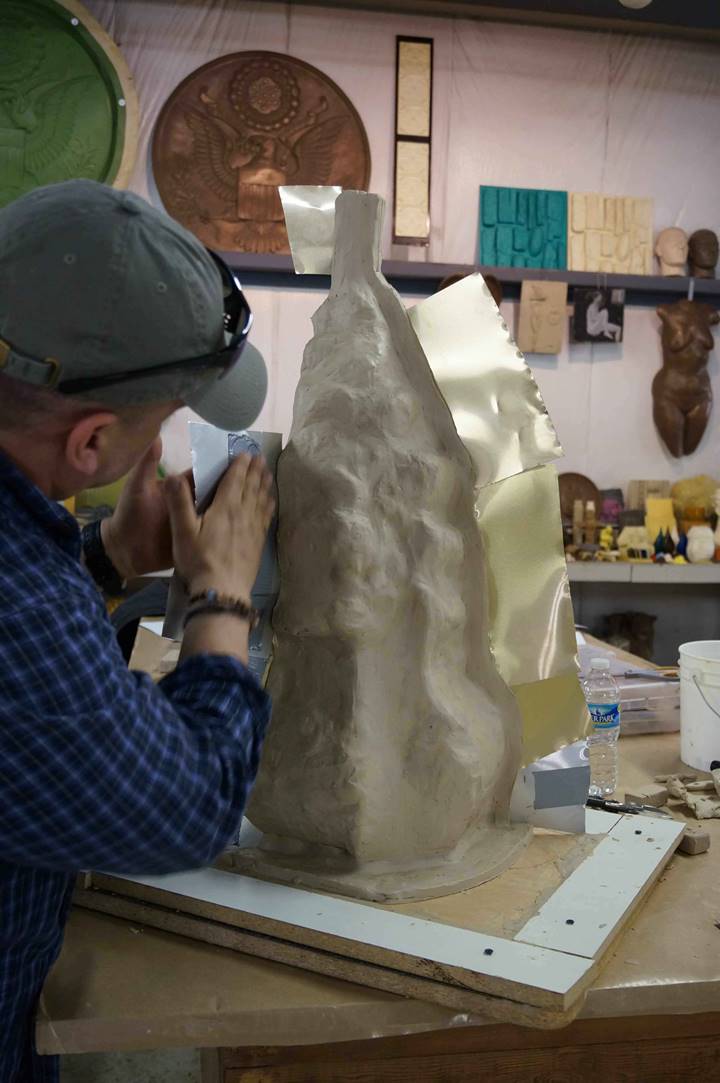 Apply Pol-Ease ® 2300 Release Agent to the clay and shims and then brush out with a dry brush to ensure even coverage. Release agent is applied to prepare for the construction of a plastic mold shell. 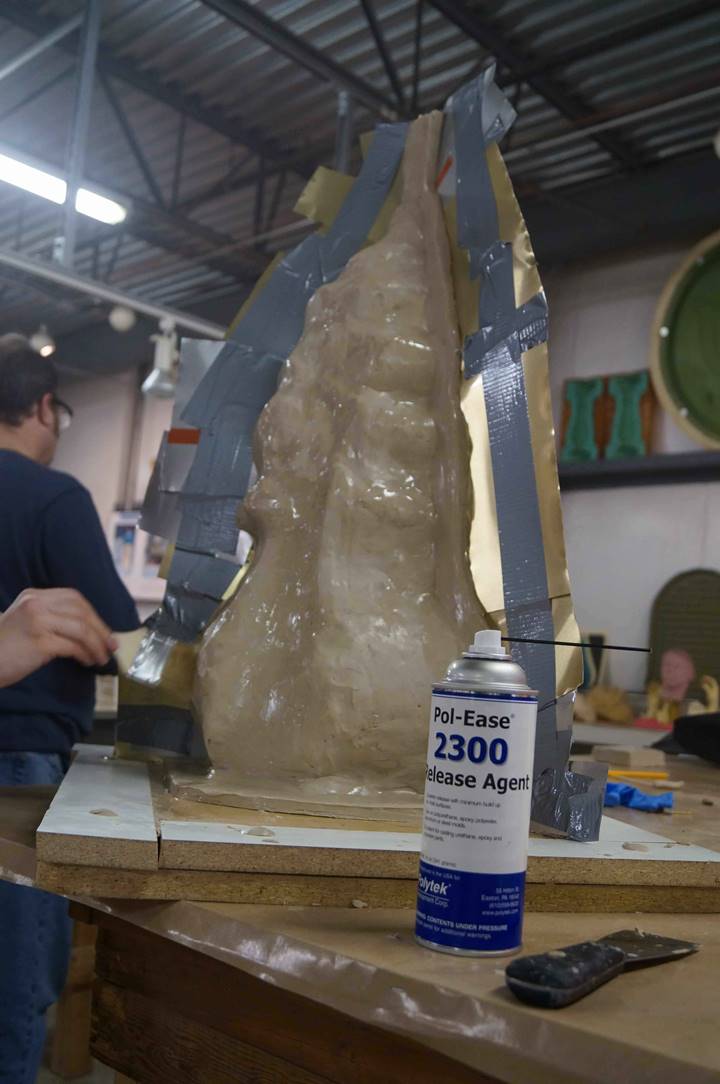 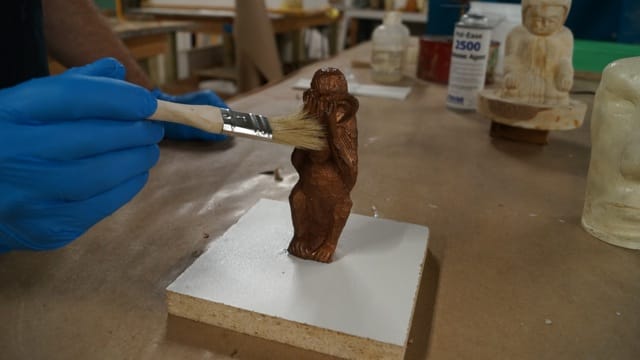 Poly 1512X, a fast-setting polyurethane plastic, was used in conjunction with PolyFiber II, a fibrous thickening agent, to make the mold shell in this instance: 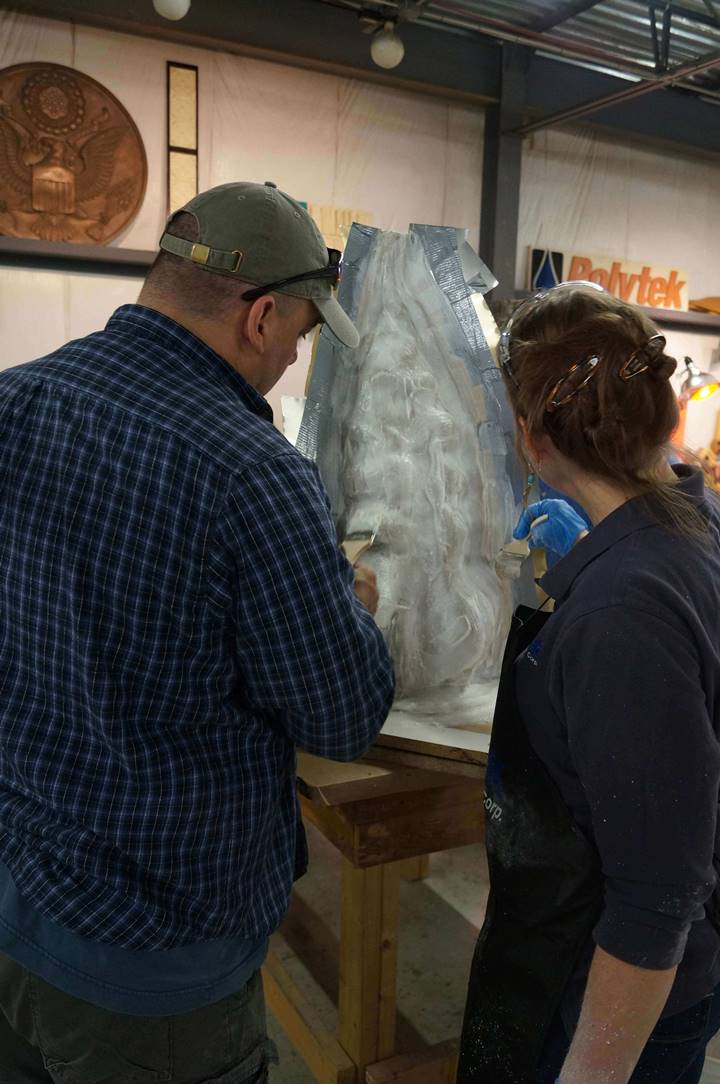 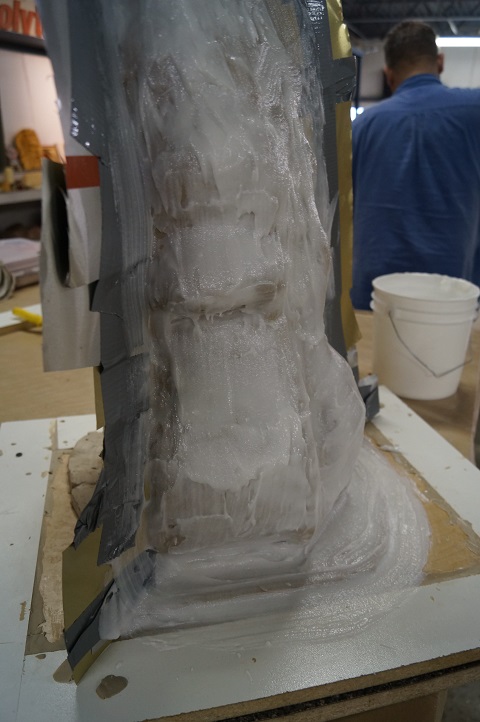 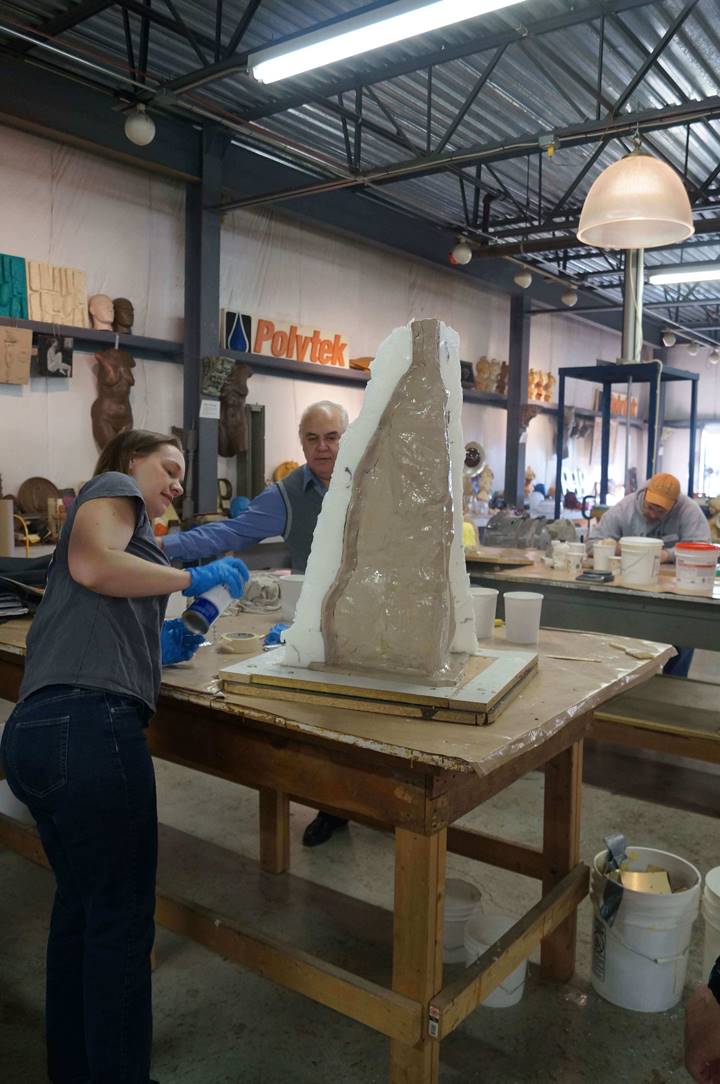 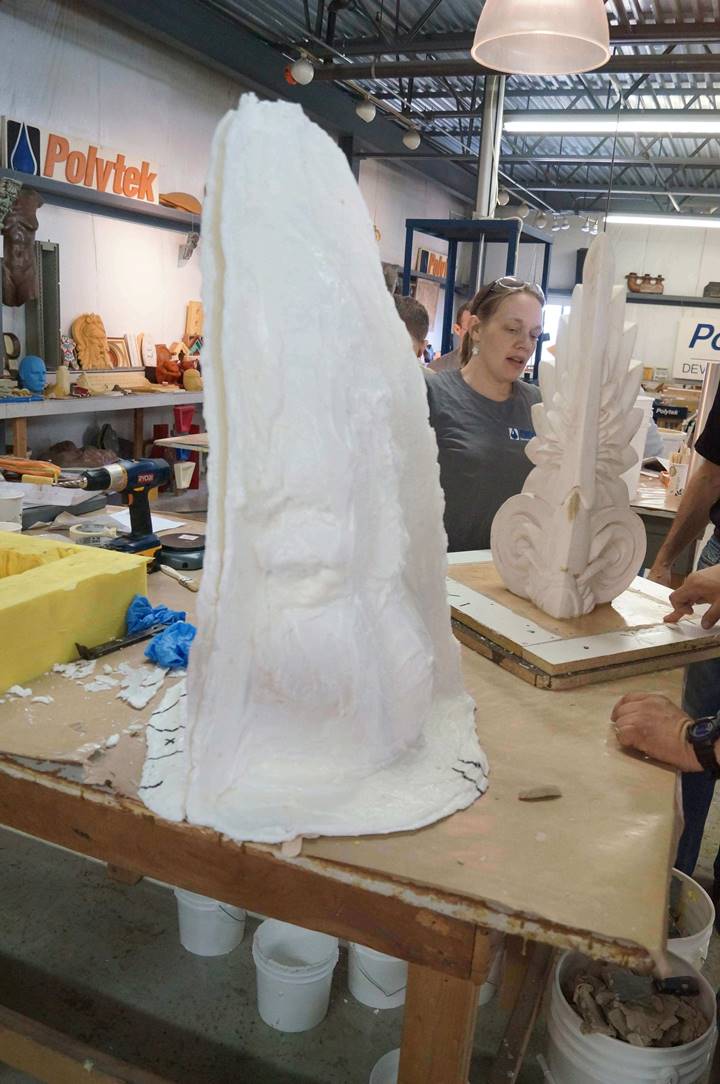 Once all of the clay has been removed, apply a proper release agent to the model (e.g., Pol-Ease 2300 Release Agent) and reposition the mold shell over the model making sure the positioning is the same as when it was initially created. NOTE: this plaster model was sealed by the attendee before arriving at the workshop – if it had not been sealed beforehand, we would have applied a sealing agent (e.g., mold soap, paste wax) prior to applying release agent.

Add hardware (e.g., nuts and bolts) to secure the two mold shell pieces together and add hardware securing the mold shell to the base board. Caulk possible leak points with plasticine clay: 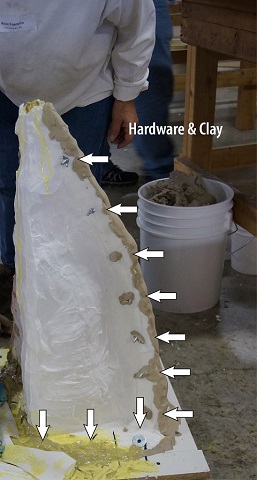 One way to estimate the amount of rubber needed is to weigh the clay that was removed from the model (the rubber will be filling the same space as the clay). Once weighed, calculate the volume of the clay by multiplying its weight by its specific volume (18.4 in³/lb), then divide the clay volume by the specific volume of the liquid rubber (27.5 in³/lb).

Carefully weigh and mix the rubber and then pour it into the pour hole located at the top of the mold shell. 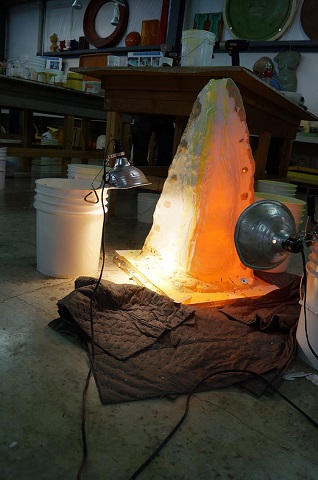 Poly 74-20 can be demolded after ~16 hours (less when heat is applied). Remove hardware and separate mold shell halves. 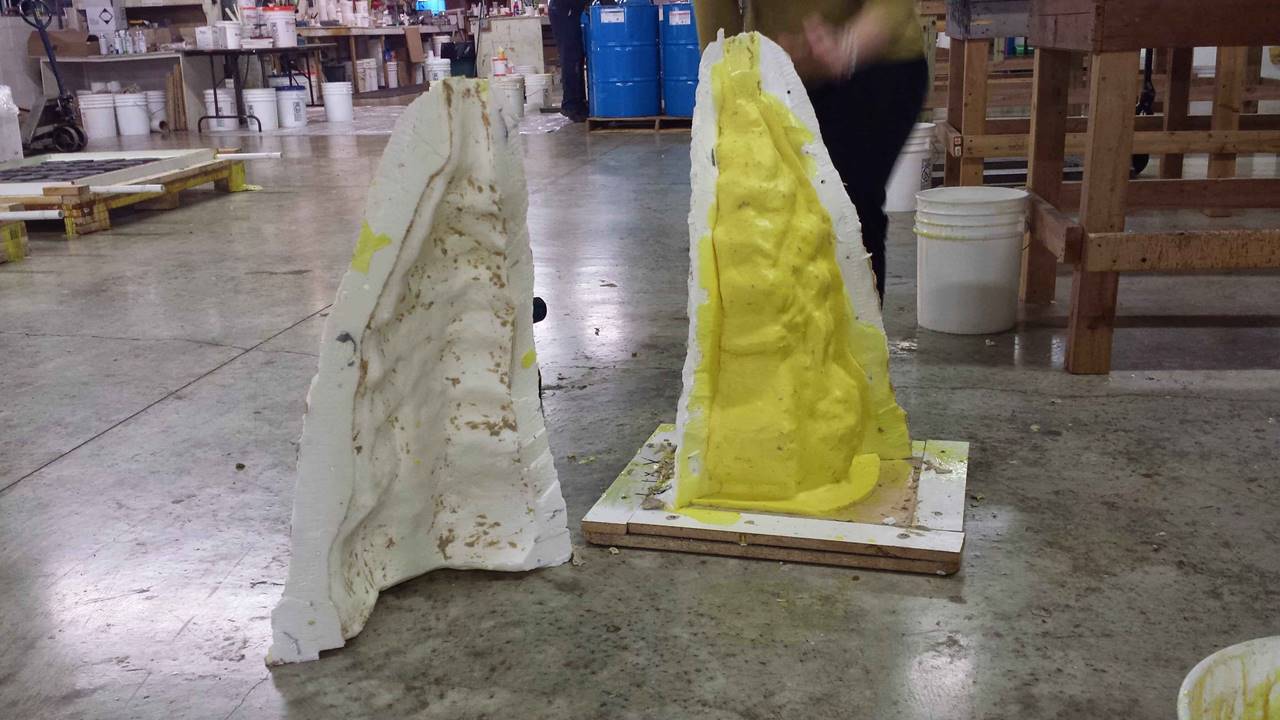 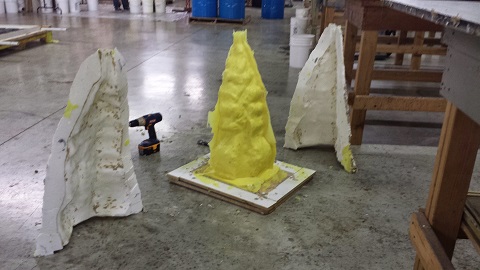 While the mold is still on the original model, make a cut through the thickened part of the mold created earlier with clay. We used both a mold key knife and scalpel for this process. 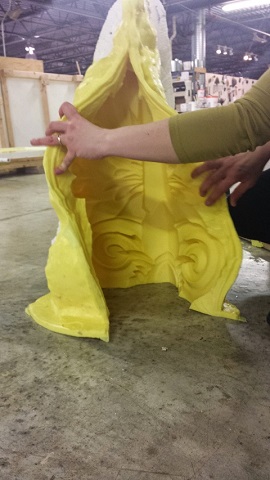 The mold is now ready for casting! 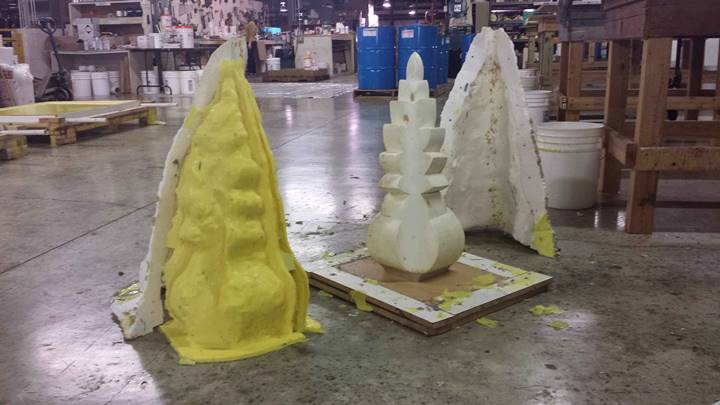